ZCASH (ZEC) Price Prediction for 2021: Will the ZEC/USD Continue to Rise in 2021? Key Factors Explained!

The cryptocurrency Zcash has shown a bearish correction lately. Considering the past month’s performance, the ZEC/USD pair has gained +$ 0.37, soaring nearly 1.76%, to trade at $ 245.7. Over a period of six months, the ZEC/USD pair has gained +$ 183.16 or 286.41%, while the pair has reported a dramatic gain of +$ 216.21, or 699.70%, on the yearly time frame. Currently, the ZEC/USD Live Price chart suggests that Zcash (ZEC) is trading at $ 5.710. Cryptocurrencies have been growing day by day despite the regulatory restrictions. Everybody knows about Bitcoin, Litecoin, and Ethereum. Apart from them, other digital assets, including Zcash, can also provide investors exciting opportunities.

Zcash is one of the most promising tokens that provide anonymity for its users and their transactions. Zcash is the first open-source digital asset based on a blockchain. The Zcash was initially released on October 28, 2016.

Furthermore, Zcash has improved its privacy by applying zero-knowledge proofs (zk-SNARKs), which allows users to verify transactions without disclosing information. Besides this, the Zcash coin also allows users to share address and transaction information they can select to comply with audits and regulations. As per its developers, ZEC’s creation is backed by strong science. Let’s talk regarding ZEC addresses. ZEC addresses are divided into 2-types:

As a digital currency, Zcash is similar to Bitcoin. The Zcash coin has many things in common with Bitcoin as Bitcoin’s framework became a foundation for Zcash. Despite this, there is a significant difference between both coin’s values. BTC is near $50,000, while ZEC is still below $300. It should be clear that the prediction of Zcash price is not an easy task. Therefore, we will examine historical price movements to predict them as best as we can. To make your investing future more secure, we will describe factors that can affect the coin’s market price, which in turn will help you make your Zcash price forecasts.

Recent Changes in the Zcash Price

Zcash (ZEC) Price Prediction for the Next 5 Years

Zcash cryptocurrency, developed by Matthew Green, was officially released on October 28, 2016. The launch of the private ZEC coin gained a lot of attention, which in turn helped its price climb to around $6,000. But the upticks were short-lived, and later ZEC price settled in the  $40-70 area. As per Coinmarketcap, Zcash cryptocurrency is the 35th biggest cryptocurrency across the globe. Despite its features, it’s not among the 15 largest digital assets. In 2018, the Zcash price was around $900. Since 2019, it has dropped within a narrow range of $30-$70.

The fluctuations in the price of cryptocurrencies generally arise due to upgrades in their blockchain or because of cooperation agreements. The same factors helped Zcash coin to grow. The earliest notable event happened in May 2017, when Zcash Coin developers agreed with JPMorgan to add the privacy technology of Zcash to the JPMorgan blockchain platform. At that moment, the ZEC coin’s capitalization and market value hit a high and drove the currency to the top 10 crypto assets. ZEC traded near $400 in June 2017.

At the beginning of 2018, the price of the ZEC coin rose further amid all-around crypto popularity. The price was around $900, but the gains were short-lived. Afterward, the crypto growth effect expired, and Zcash returned to its normal rate. The next meaningful rise occurred in June 2018, when the price rose above $100. The reason could be associated with the strength of bulls who tried to push Zcash from its lowest level since 2017. Afterward, the price rose in February 2020. However, the buyers were not able to keep the price at highs. As a result, Zcash Coin dropped below $25 in March 2017. Again Zcash was pushed to $100 in August 2020. Zcash was pushed to $100. Although ZEC lost in value in September 2020, this rise helped the Zcash Coin move from previous lows.

Zcash is highly volatile. It’s not easy to predict its value in advance. As per WalletInvestor, Zcash is seen as a high-risk investment opportunity. A 1-year projection is $55.304. The change will amount to -22.968%. Besides WalletInvestor, DigitalCoinPrice also seems less convinced that ZEC will become expensive in 2021. The website thinks the start of 2021 will not be good for the cryptocurrency as it will decline to $7.36. Afterward, the Zcash coin will get an opportunity to recover in the next two months, but the roof will be set slightly above $50. Before the end of the year, the price can stay in the thin range of $30-40. The price of Zcash is expected to soar to $576.79 in December 2021 and it may skyrocket above $1000 in 2025. As ZEC is one of the most volatile crypto assets, it’s hard to forecast its price correctly. To understand properly, we recommend applying fundamental and technical analysis and reviewing your projections regularly.

Supply and demand – One of the key factors that influence the cryptocurrency price is supply and demand. The higher the demand and lower the supply, the higher the price. Conversely, if demand is low and supply is high, the prices of the coin will decrease. As we are well aware, the supply of cryptocurrencies is limited. Moreover, over time it starts to slow down slowly. Therefore, the demand for assets will likely exceed the available amount. The demand for individual cryptocurrencies may vary greatly. This, in turn, is influenced by many other specific factors that distinguish a given virtual coin from others.

Mining – Cryptocurrencies do not come from anywhere, but Crypto miners extract them using specialized equipment called excavators. This method becomes more and more difficult day by day. If the cost of extracting virtual currencies rises, it tends to underpin the prices of the coin.

Power of the media – The media is seen as one of the key tools that can help or harm cryptocurrencies. They are considered a type of spindle that drives moods among investors. Normally, the good news will leave a bullish impact on it, while bad news can cause panic, which leads to a quick fall in cryptocurrencies.

Financial crises – The cryptocurrency prices also rely on the economic situation in the concerned countries. If the country’s financial system starts to fall, people start to panic and run into other assets.

The ZEC/USD  pair is exhibiting bearish correction below the May 2018 high level of $406.155, which now is working as a double top. On the technical front, the pair is trading slightly bearish at $241.39, holding above monthly 20 and 50 periods EMA support levels of $189 and $levels, respectively. The leading technical indicators, the MACD (Moving average convergence divergence) and RSI (Relative Strength Index), is exhibiting a bullish trend in the currency pair.

On the monthly time frame, the MACD and RSI are holding in the buy zone, exhibiting a solid bullish trend in the price. ZEC/USD is on the verge of closing tweezers’ top patterns that may extend selling trends until $189.53. As you can see on the monthly chart, the pair has completed 38.2% Fibonacci retracement at $243.47, and now it’s likely to complete 50% Fibonacci retracement at $201. This level’s violation can extend the selling trend until the $159 level marks 61.8% Fibo level. 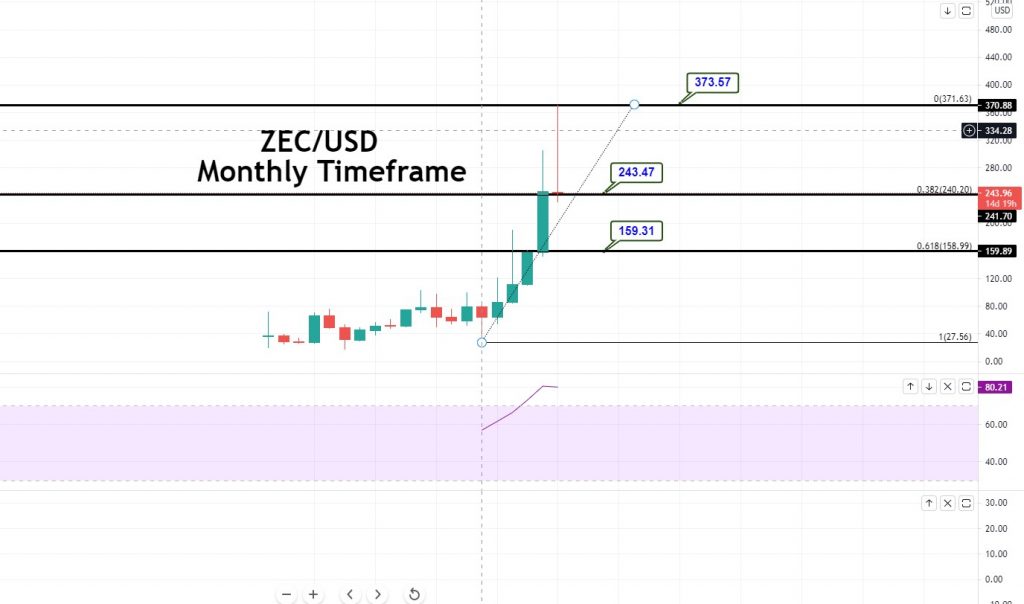 On the monthly time frame, ZEC/USD forms three white soldiers that are likely to lead the pair towards the $373 and even $450 level. On the lower side, ZEC may find support at the $243 level, and below this, the next support holds around $159. 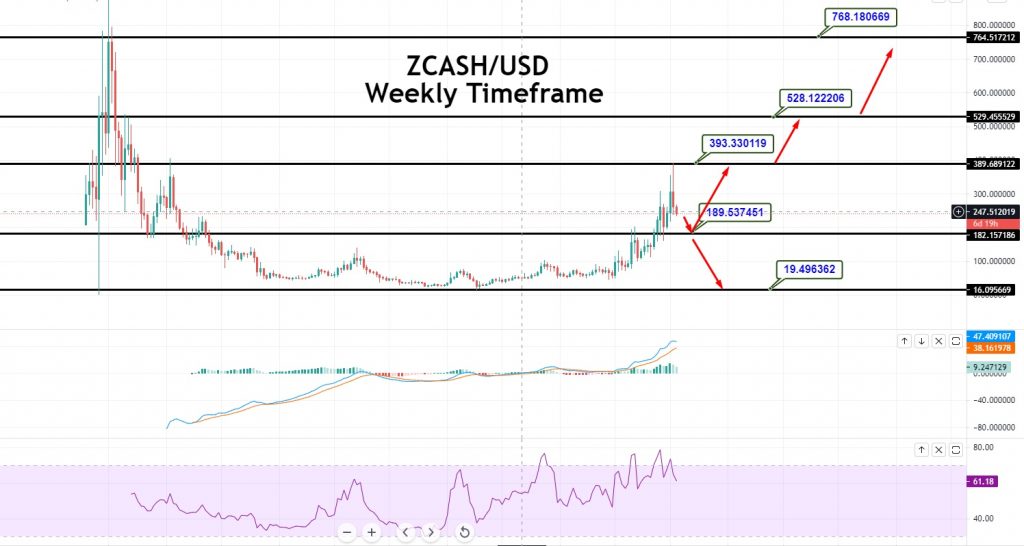 The ZEC/USD pair has entered the bullish zone at the $389 level on the weekly timeframe and had strong odds of a bearish correction until the $189 level. The series of exponential moving averages are also suggesting chances of a buying trend in the pair. These exponential moving averages are holding around the $189 level, suggesting buying opportunities in the pair. The pair may find immediate support at the $210 and $189 area, and the violation of this level can lead it towards the $110. The weekly RSI and MACD indicators support a buying trend. Therefore, the violation of the immediate resistance area of the $393 level can lead the ZEC/USD price towards an initial target level of $528 and $768 level afterward. Good luck!