When Motorola announced four new smartphones during CES, only one of them wasn’t branded Moto G, and that’s the One 5G Ace. This handset is also the only one that has 5G, and as you can guess, it’s the big selling point.

I’ve reviewed one of these phones every week since they came out, and as I’ve noted, Motorola only does specialty phones now. Rather than trying to provide the most value that it can at a certain price point, it digs in on one specific feature, solving one pain point and leaving the rest. For the Moto G Stylus, it’s that it comes with a pen; for the Moto G Power, it’s the battery life; and for the Motorola One 5G Ace, it’s that it delivers 5G at Motorola’s lowest price point yet.

Previously, its lowest price point for 5G was $444.99 with the Motorola One 5G, but now it’s swapping out the Snapdragon 765 for a Snapdragon 750G and cutting a few other corners to come in at $399.

Just like all of the handsets that Motorola announced at CES, this one is made out of plastic. I actually feel like that was a poor choice here. I get it that the lower the price, the lower the quality of materials, but this isn’t Moto G territory anymore. This is a $400 phone and frankly, it’s not one of the most inexpensive 5G devices on the market. 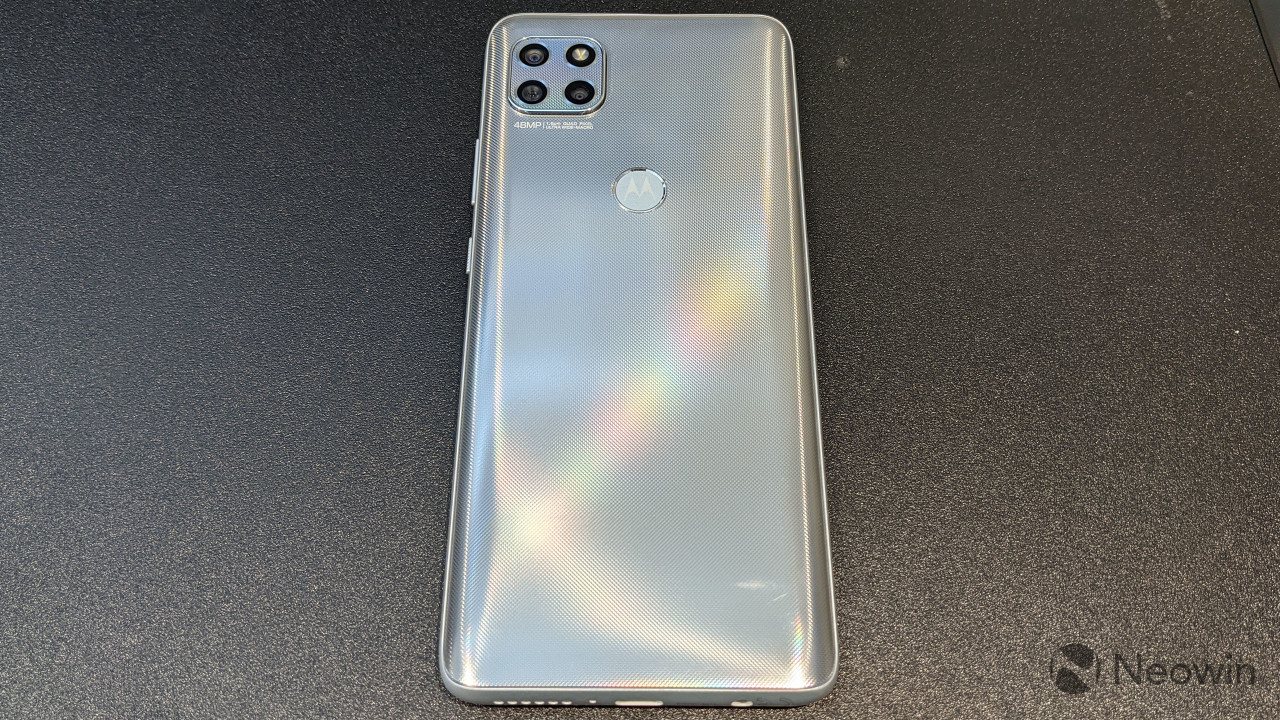 The color is called Frosted Silver, and it’s nice. Motorola’s been playing a lot with rainbow-colored reflections in its phones lately, and there’s a touch of that here. Consider the kind of reflections that we saw in the glass of the Motorola Edge, and then imagine as if it was done with a color that had ‘Frosted’ in its name. 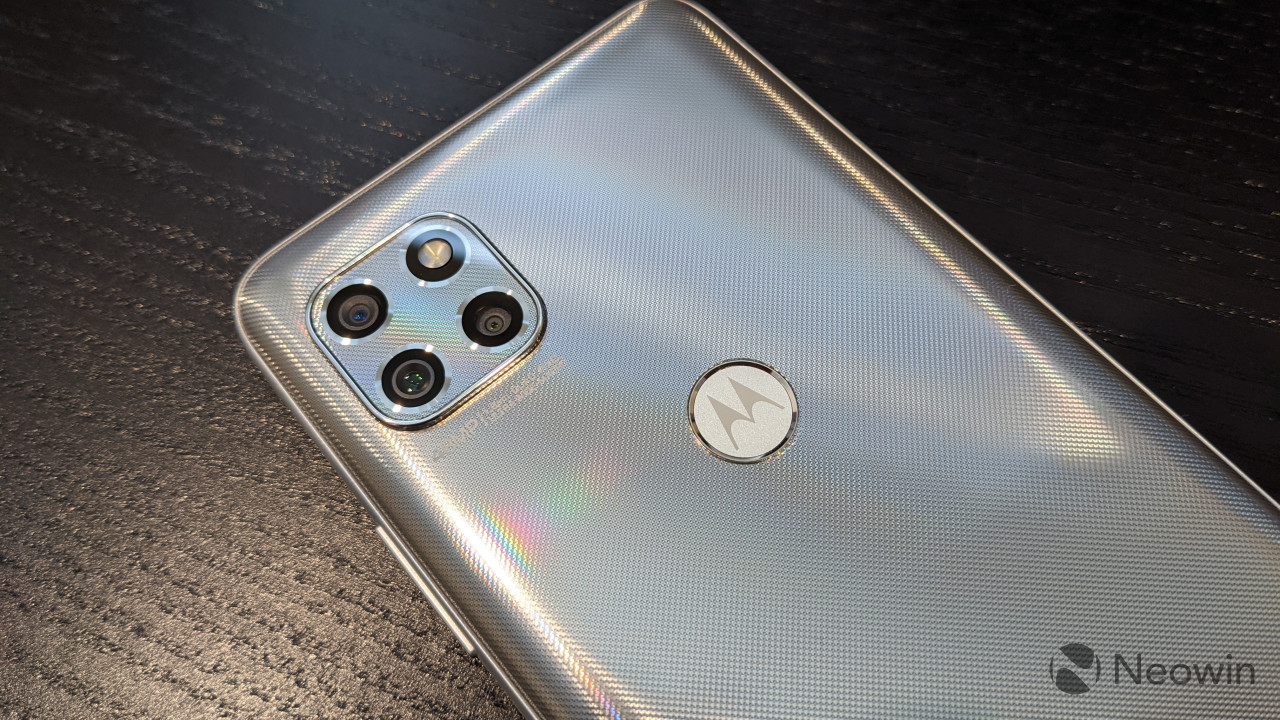 There’s a lot of inconsistency in the design between the four phones that were announced. For example, this one looks a heck of a lot like the Moto G Power, except it’s shinier and has a fingerprint sensor on the back. Yes, out of those four phones, the highest-end one and the lowest-end one, the Moto G Play, have fingerprint sensors on the back, while the two in the middle have it on the side. Personally, I think having it on the back is the right choice.

The camera housing is placed in the top-left corner, while some other devices put it in the middle. It’s square with rounded corners, a design that we’ve seen from plenty of other companies on the market. 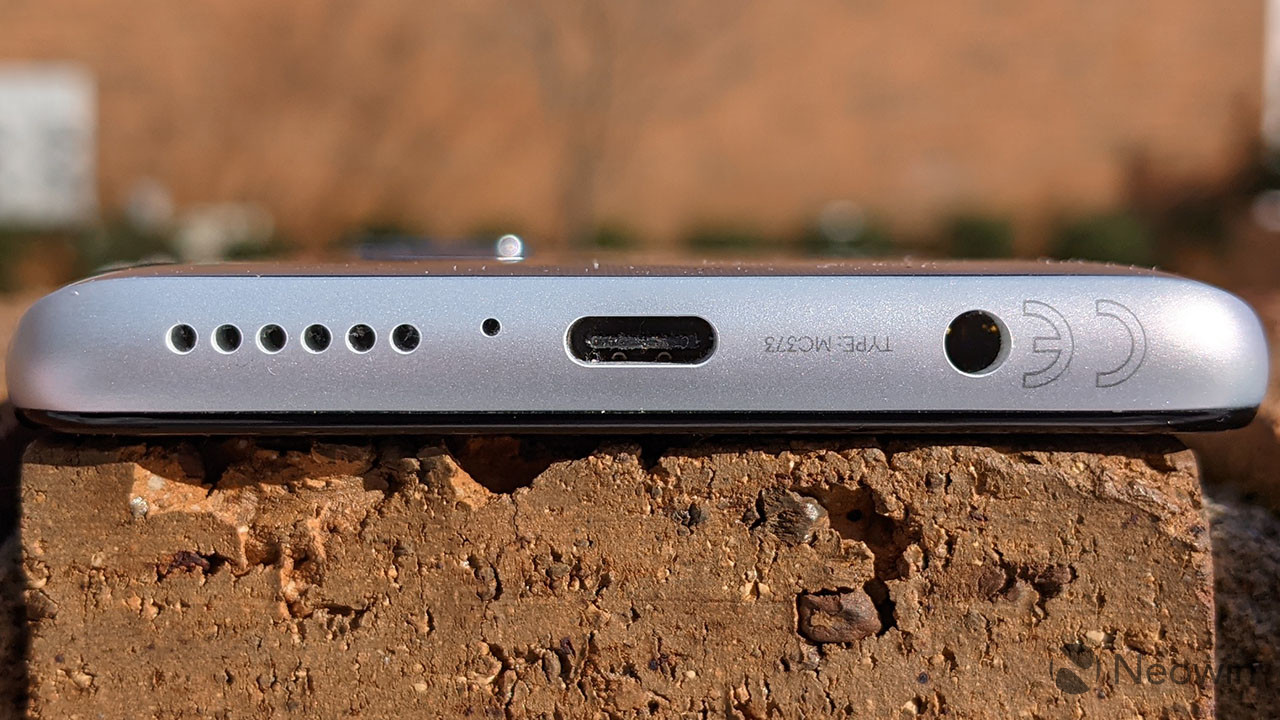 Another thing that there’s no consistency on from Motorola is the placement of the headphone jack. Some devices put it on top, while others put it on the bottom alongside the USB Type-C port. Personally, I think that the correct decision is to put both ports on the same side, as it makes charging while listening to music easier. 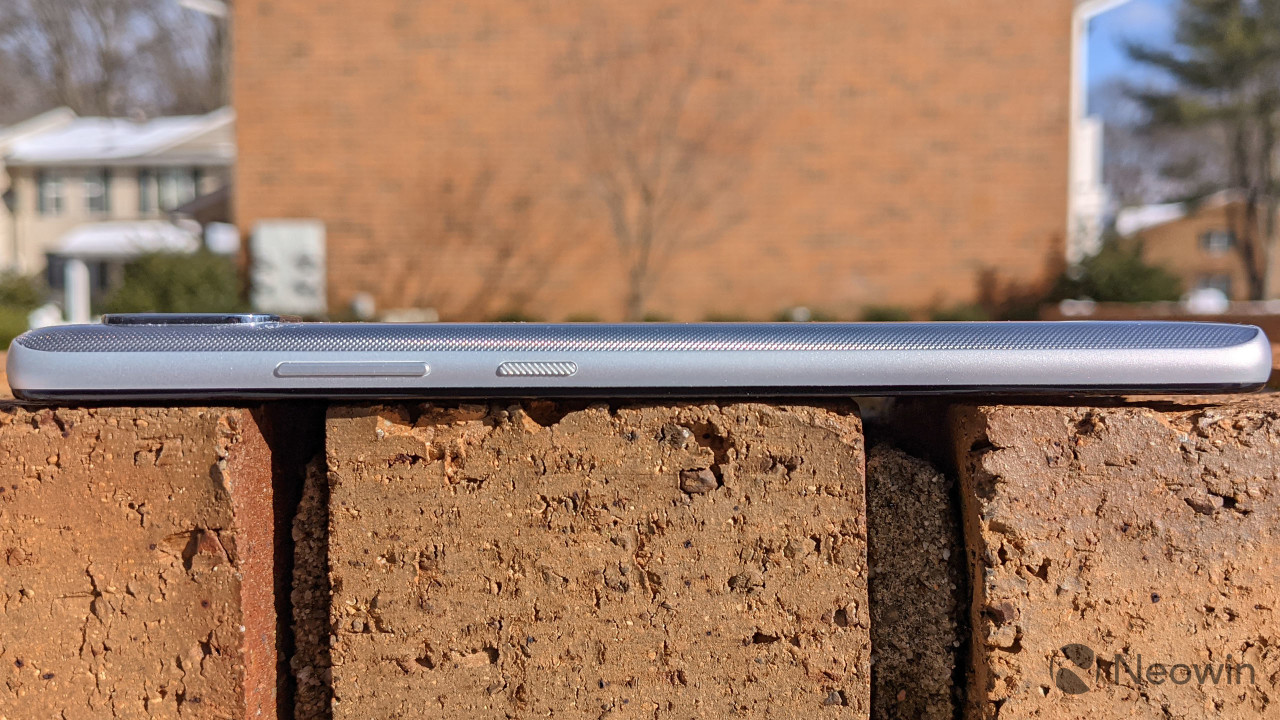 On the right side, there’s a power button and a volume rocker. And that’s about it.

While the phone looks nice and all, nothing about it actually stands out to me. It’s 9.9mm thick and weighs 212g, so it doesn’t feel particularly thin or light, and that feeling will get worse with a case on it. I know that a $400 phone isn’t premium, but we’re pushing into that segment where they should start to feel premium, and this isn’t it. 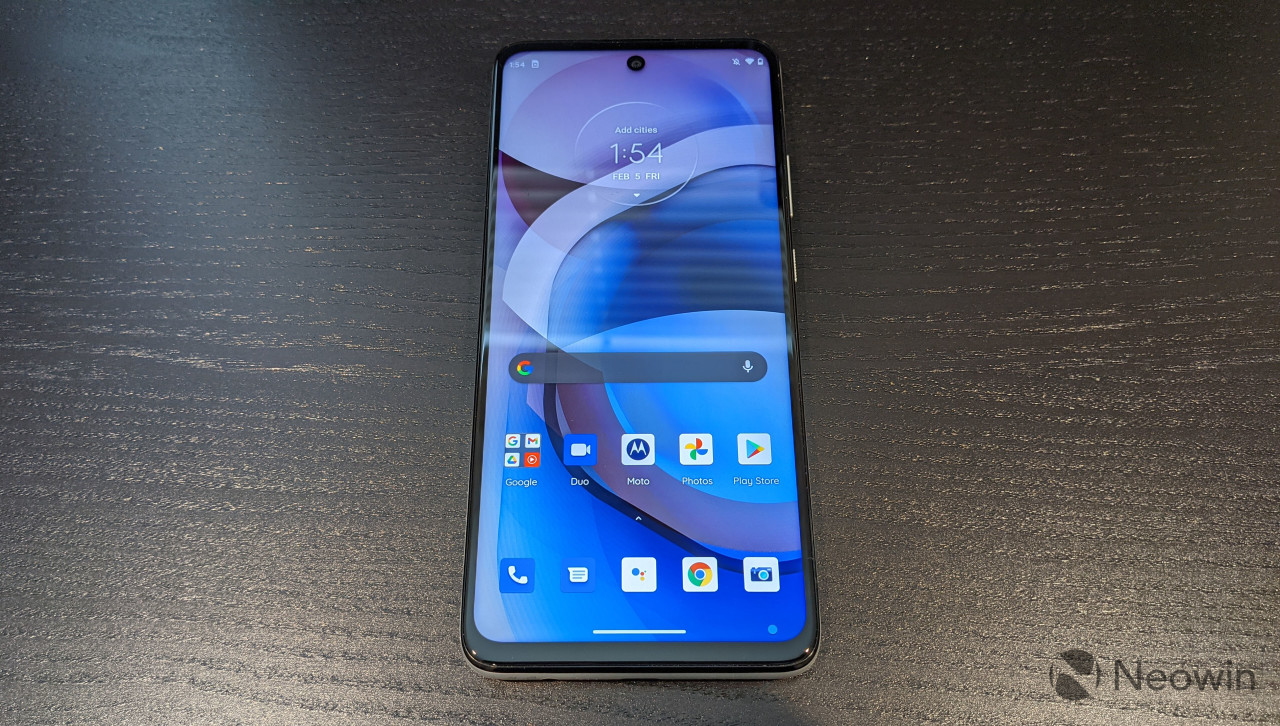 As usual, Motorola has its Moto Display features that can be found through the pre-loaded Moto app. Basically, it’s an ambient display that either comes on at random, or when it senses that you’re picking up the phone. Along with the time, it can also show you notification badges that you can tap to open. 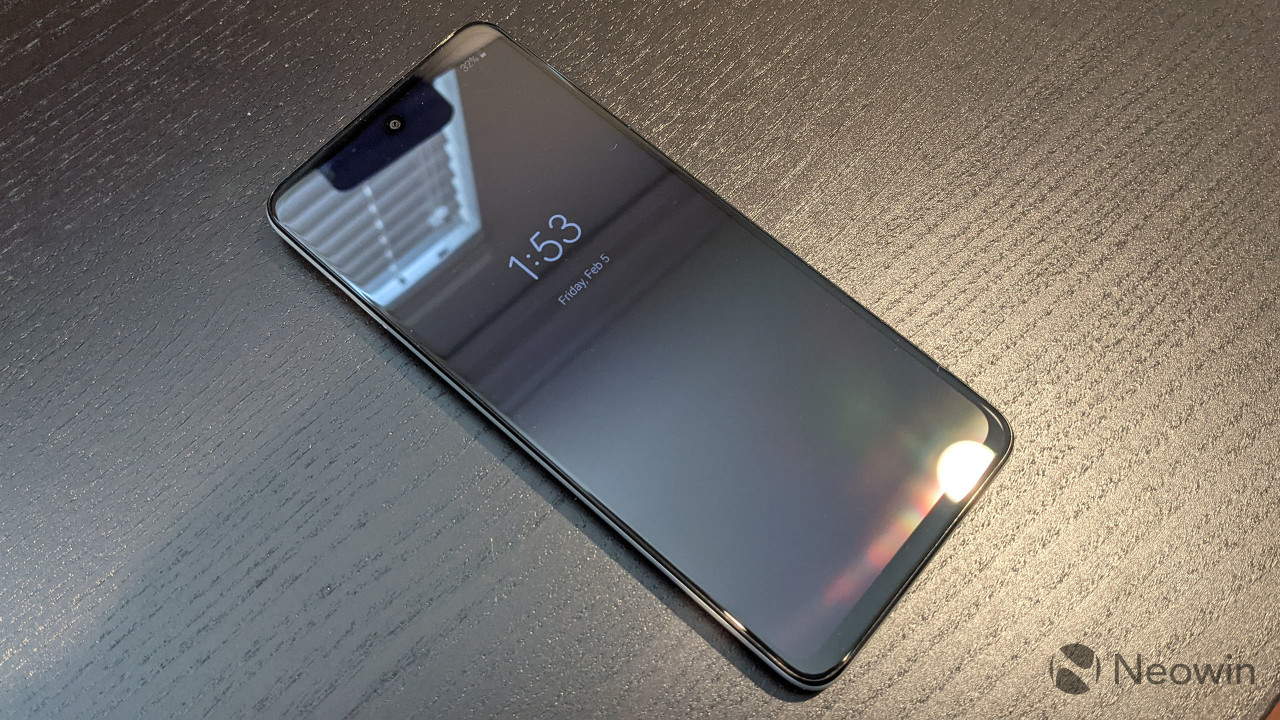 The one downside to this being a regular LCD is that the whole thing is backlit, so when that ambient screen comes on, you can see that the whole thing is lit up. Motorola even added some blue animation to the background to make it less obvious that this is happening, but it can be solved with an OLED display, which can turn pixels off. Unfortunately, Motorola doesn’t use OLED as much as its competitors do. You can only find it in the Edge series. 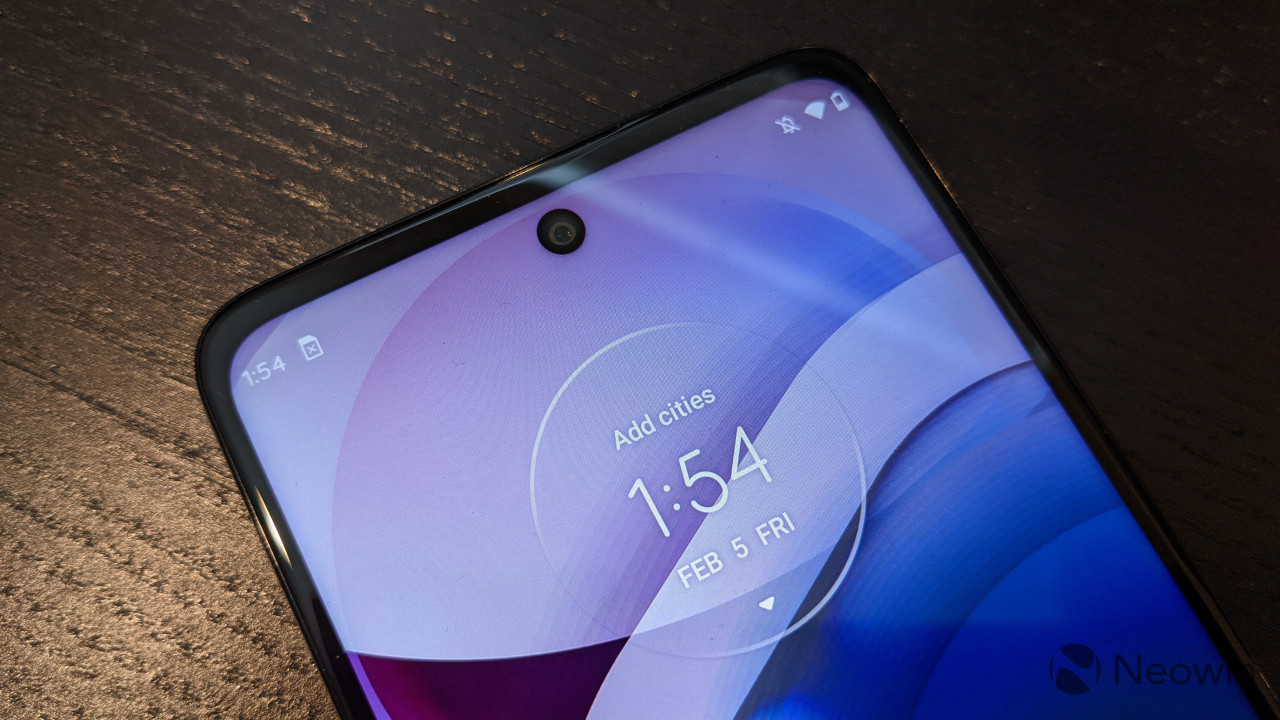 As you can see, there’s a hole-punch cut-out for the front-facing camera, which is fine. It’s what all of the cool kids are doing these days, and that’s kind of surprising to me. A tear-drop notch like you see in the lower-end Moto G Play actually takes up less space on the display, but like I said, it’s the current style for smartphones.

The main sensor on the Motorola One 5G Ace has a 48MP resolution and f/1.7 aperture, and it’s the same main sensor that’s found on the Moto G Stylus and Moto G Power. It uses quad pixel binning for better low-light performance and produces 12MP images. On top of that, there’s a night mode that you can use.

While Motorola calls this a triple-lens camera, there are only two that matter. The second is an 8MP ultra-wide sensor, something that I find always comes in handy. The third sensor is a 2MP macro lens, and like all 2MP camera sensors, it only exists so that OEMs can say that their device has a certain amount of cameras.

As usual, Motorola has a bunch of fun camera features, like spot color and cinemagraph. Spot color video is new, and you just have to select a color and the rest will show up as grayscale. It’s not always practical, but like I said, it’s fun. That’s one thing that I always appreciate about Motorola. As much as I can criticize the hardware, a lot of the features that the firm comes up with are just great.

As you can see, the camera is decent enough. The ultra-wide lens really struggles in low-light, which is a shame because it will take these really soft images in situations where the main sensor actually does pretty well.

The Motorola One 5G Ace uses a Snapdragon 750G chipset, a step down from the Snapdragon 765G that it used in the One 5G. This device actually has more RAM, however, at 6GB instead of 4GB, so it does feel a lot smoother. That extra RAM definitely comes in handy.

And of course, the Snapdragon 750G is a 5G chipset. I don’t write dedicated sections for 5G anymore, because while every phone I use has 5G, it’s one of the first things I turn off. It’s not because of battery life or anything else; it’s just bad, or at least it’s bad where I live. My area is covered with T-Mobile’s nationwide 5G network, and my experience on any device is so much better when I switch settings to 4G-only. I also recommend to my friends to shut off 5G when they start complaining about their phones. The other reason that I don’t write about it anymore is because it’s been done to death. 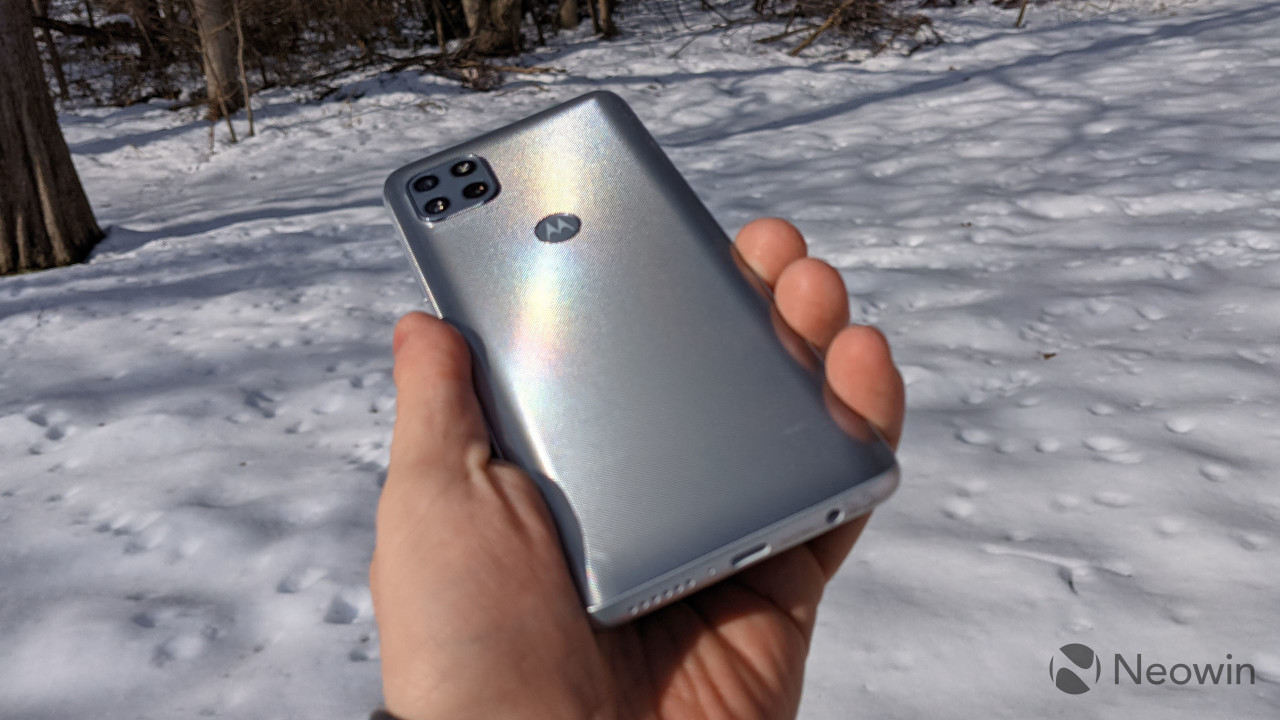 We’ve all done the speed tests, and we all know that sub-6GHz 5G is just moderately faster than 4G LTE. And yes, this is a sub-6GHz phone, so there’s no mmWave support, not that mmWave 5G is any more useful.

The real problem is that I don’t see 5G as an actual value proposition, so when Motorola comes out with a device that has 5G as the main value prop, it doesn’t impress me. I still totally recommend that your next phone have 5G; after all, this is supposed to be good at some point, but it should complement a phone that you already want.

Battery life is quite good though. Motorola promises two days of battery life on the 5,000mAh battery, and it delivers. It’s not three days like the company promises for the Moto G Power because the screen has twice as many pixels and the chipset requires a bit more power, but you definitely get a lot of battery life here.

For benchmarks, I used Geekbench 5, AnTuTu, and GFXBench. First up is Geekbench, which tests the CPU. 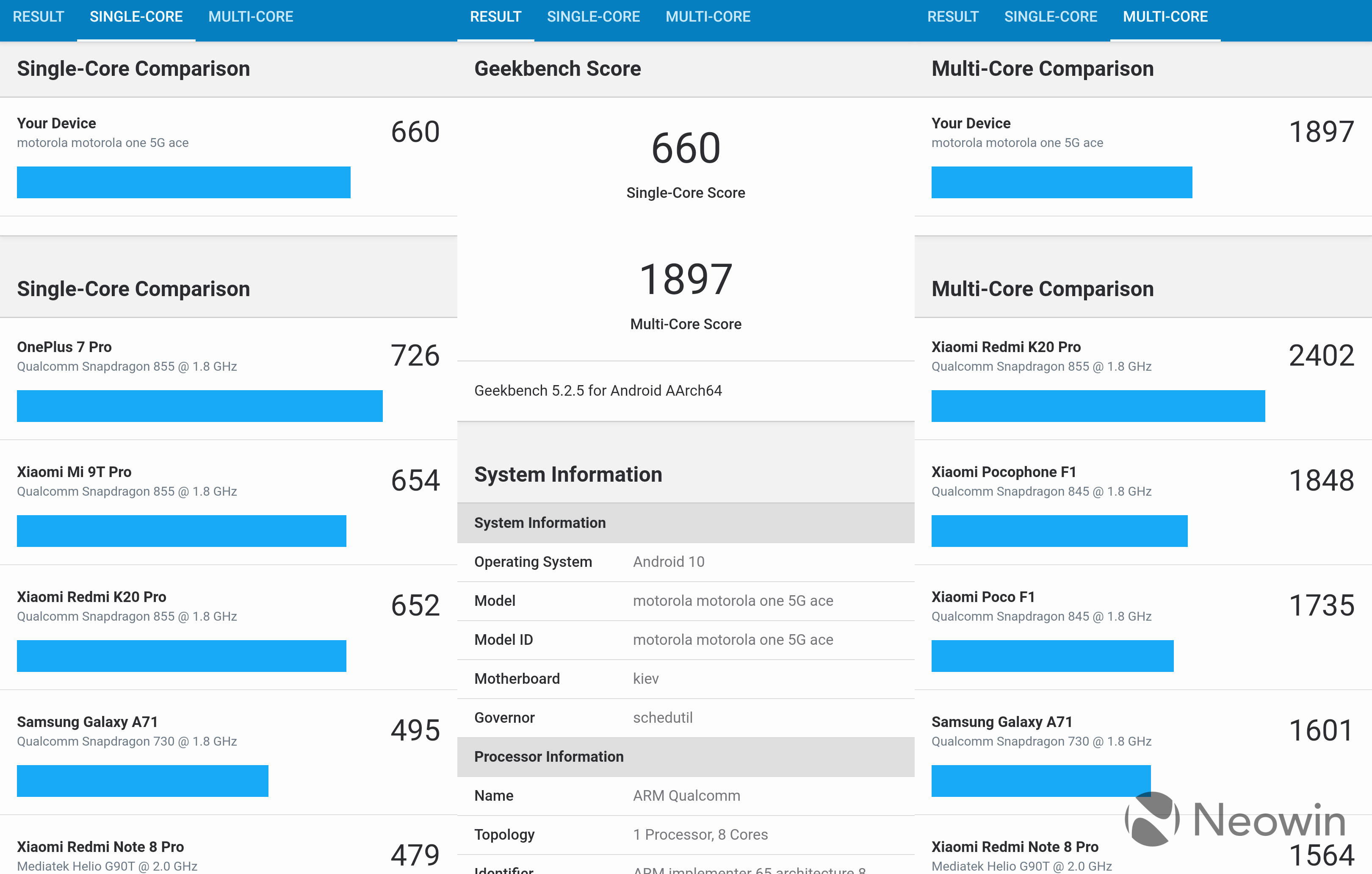 Next up is AnTuTu, which tests everything. 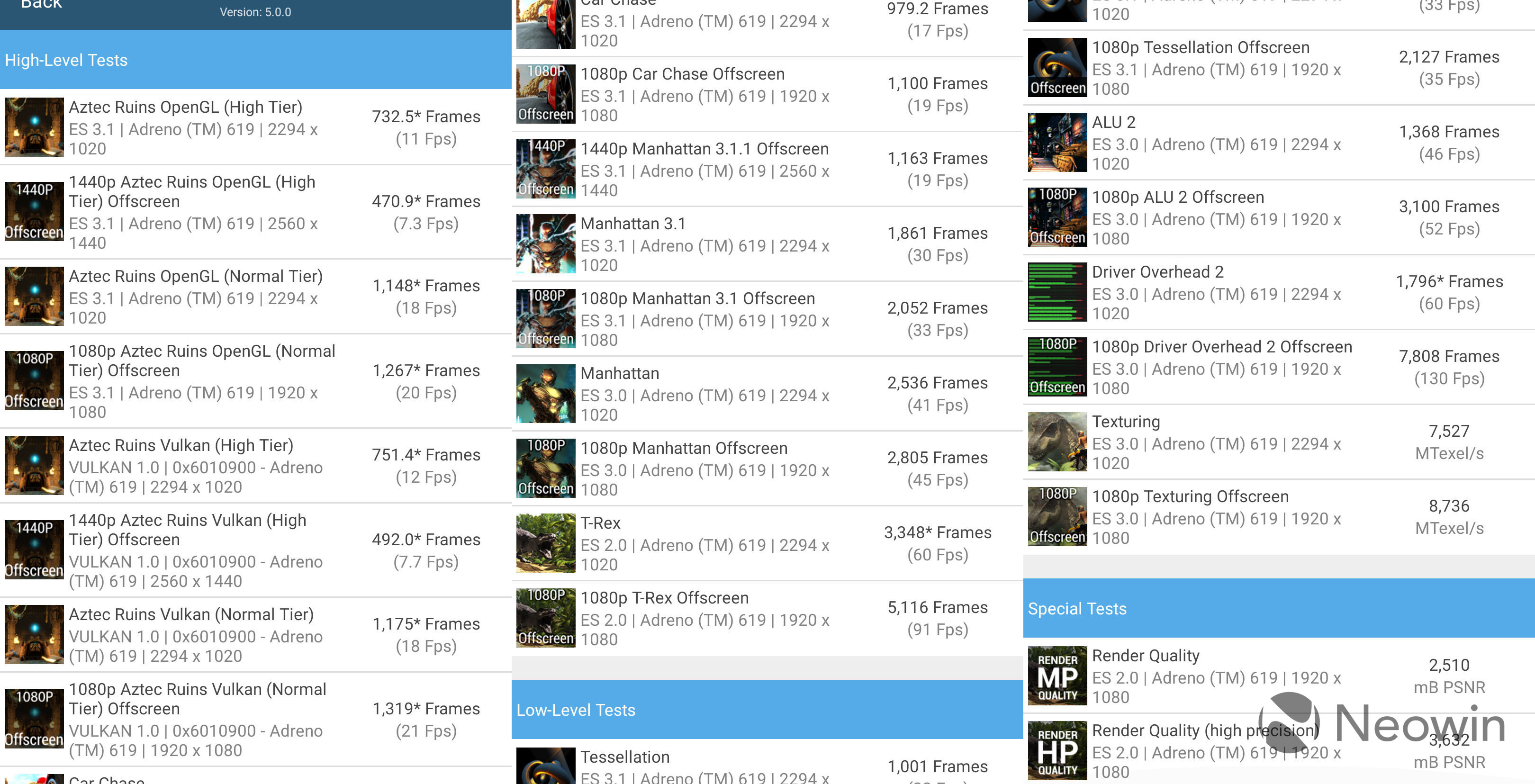 The biggest issue with the Motorola One 5G Ace is that I just feel like it should offer more at its price point. Here in the U.S., 5G really isn’t a selling point, or at least it shouldn’t be. Also, we have phones like the Nord N10 5G that do 5G at $299, albeit with a lesser Snapdragon 690 processor. Indeed, Motorola told me that it picked the Snapdragon 750G so users could get some gaming performance, which is awesome. 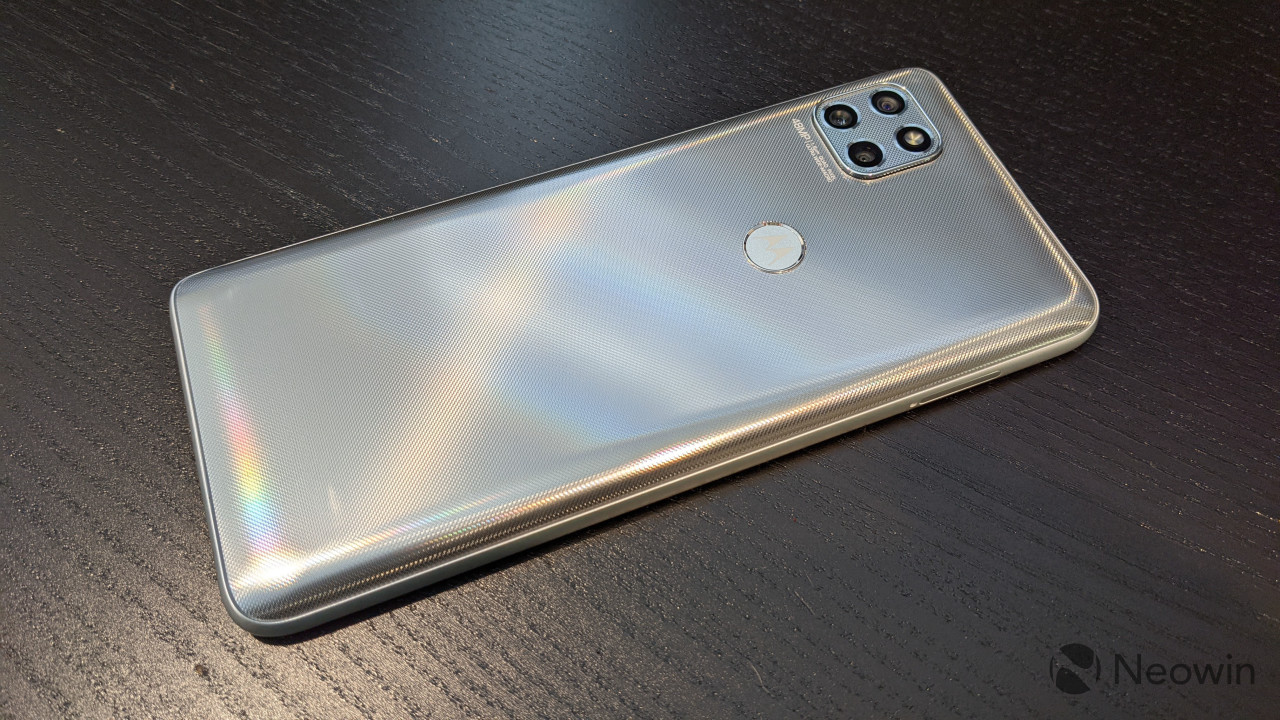 It’s a decent overall phone though. It comes in a nice-looking Frosted Silver color, has a fingerprint sensor on the back, has a 48MP camera that does a decent job in low-light. There’s just nothing that stands out to me. At $400, I’d like to see something more, like a 90Hz display and wireless charging.

Still, if 5G is the thing that you’re down for, the Motorola One 5G Ace gets it done. If you want to check it out on Amazon, you can find it here.

As an Amazon Associate, Neowin may earn commission from qualifying purchases.