Monero (XMR) is a cryptocurrency that focuses on privacy and decentralization. It prides itself as the first untraceable digital currency, meaning nobody can trace your transactions back to you. Monero was created in 2014 to provide an alternative for those who wanted more anonymity than Bitcoin offered and it has been growing in popularity ever since. In recent news, the price of Monero dipped below the vital average line of 200-DMA while other coins are going up or sideways in value which could be attributed to a number of factors such as bot trading, negative media coverage, or general uncertainty with cryptocurrencies. Though the price of Monero has been on a downward trend, it still is one of the most popular cryptocurrencies to date. 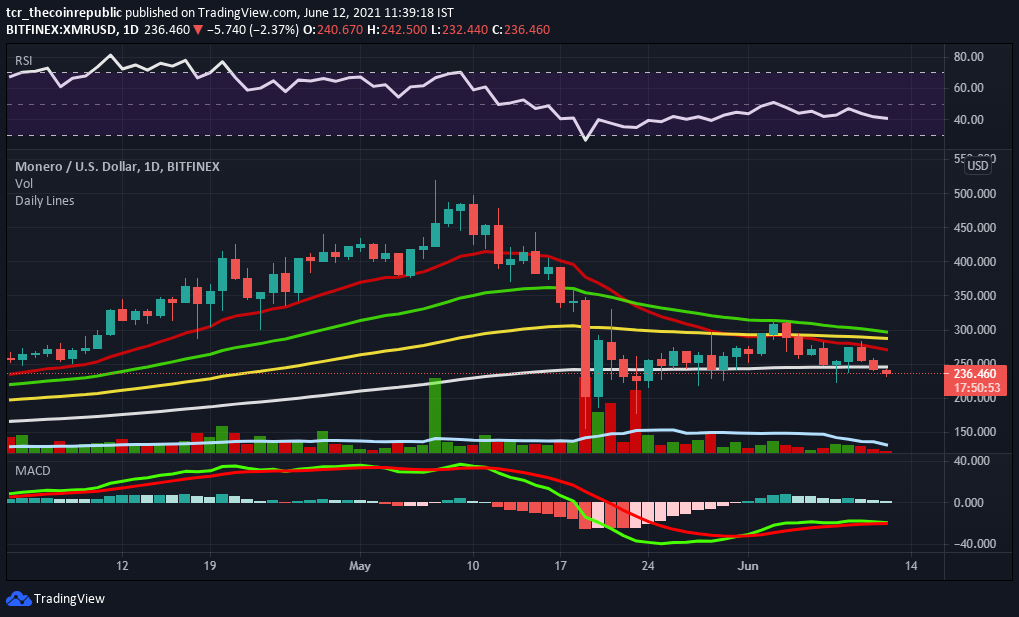 This week Monero (XMR) traded at $235.44 with a market cap of about $4,226,879,180 and 24-hour trading volume worth over $245,127,012. It’s currently sitting in 27th place, according to CoinMarketCap data. The Monero token is now valued at just under 0.006719 BTC. While researching this post I found that some traders believe XMR could be due for an upswing after Bitcoin futures launching which might lead towards higher prices while others think there will continue to be more volatility within cryptocurrency space as well as potential bans or strict regulations by governments around the world. Monero price is facing a lot of resistance and it’s not certain if Monero will be able to break through this zone without reversing position, but at present we are not seeing positive signs that could lead towards higher prices.

MACD also project breaish trend on monthly chart and is about to give a besrish crossover soon. As the buyers signal line and sellers signal line is heading closer to each other.

Mr. Pratik chadhokar is an Indian Equity, Forex, Cryptocurrencies and Financial Market Advisor and analyst with a background in IT and Financial market Strategist. He specialises in market strategies and technical analysis and has spent over a year as a financial markets contributor and observer.