The year 2021 seems to be the year of cryptocurrencies. For various reasons, crypto has made headlines across the globe. Be it countries banning cryptos, or Tesla CEO Elon Musk endorsing or criticizing coins, cryptocurrencies remained one of the most trending topics this year.

While mainstream cryptos like Bitcoin, Ethereum witnessed several ups and downs based on various economic factors, meme coin Shiba Inu, which was introduced in 2020, witnessed a price and popularity spike in 2021. Shiba Inu topped the Coinmarketcap index of most-viewed crypto coins in 2021 with 188 million-plus views. Its popularity even surpassed that of Bitcoin.

What Led To The Shiba Inu Price Hike?

The price of Shiba Inu was at its lowest at the beginning of 2021, when its price continued to be $0 for a considerable period in January. It was only towards the end of the month that its price rose to $ 0.00000001. The price remained considerably low till the time Musk tweeted about Shiba Inu on March 14 for the first time in the year. The impact of his tweet was visible immediately, with the highest recorded price in April being more than 300 per cent higher compared to the price in March.

“The price of Shiba Inu has been largely influenced by the tweets of Musk. We can find a pattern between the time he tweeted about Shiba Inu and its price rise,” adds Manish Kumar, co-founder of two blockchain-based financial markets platforms GREX and RealX. 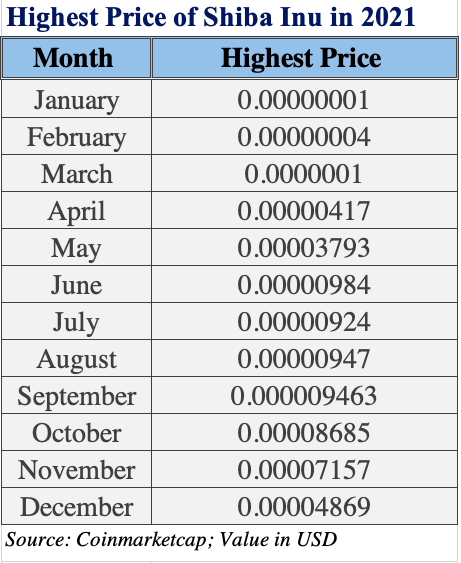 Again, in May, Musk replied to a tweet, “I’m looking for a shiba pup!” and the impact was clearly visible in the price rise of Shiba Inu. The highest price in May rose by more than nine times as compared to April.  Immediately after the tweet, there was an instant price rise of 25 per cent on that day and it recorded an all-time high as compared to the last four months. Crypto experts often term the relation between the price fluctuation of Shiba Inu and Musk’s tweets as “Musk Effect”.

The price surged nearly 1,000 per cent in September, after Must tweeted on Shiba Inu puppy.

Shiba Inu prices skyrocketed in October to take this meme coin to a new high. The Shiba Inu coin, which is a self-proclaimed “Dogecoin killer”, is a spin-off of the already existing Dogecoin.

After Musk’s tweet in October, it became the 11th largest cryptocurrency in the world by market value. Although, another tweet from Musk that mentioned he didn’t own any SHIB tokens brought it back to the 13th spot. Again the price rose by more than nine times between September and November.

“These meme coins are not active assets. Speculations come from those who is believing in them. Like start-ups have led investors and, accordingly, it gets more attention and funding. Similarly, for these meme coins, people tend to invest depending on who is actually endorsing them. Musk’s tweets have been the major driver of the fluctuating price of Shiba Inu,” adds Kumar.

This meme coin has been highly volatile and often there has been demand and petitions from the investors to burn it. This Christmas, 239 million Shiba Inu (SHIB) tokens, worth approximately $9,000 were burned at a party organised by Steven Cooper, the CEO of Bigger Entertainment, the world’s first crypto-based record label. The highest price in December fell by nearly 32 per cent as compared to November.

After its record spike in October, the expectation grew among investors and when it started underperforming, investors demanded Shiba Inu coin to develop a policy to burn a significant amount of the Shiba token supply.

Despite, Shiba Inu burn being in demand several times, the meme coin continued to be among the leading popular meme coins since October.