Bitcoin SV has the only crypto which hasn’t benefited from the surge in the cryptocurrency market so far. It has surged twice but has given back the gains pretty soon. It startet to join the started life in November 2018, as a hard fork of Bitcoin Cash BCH, which itself started life as a Bitcoin fork. The SV stands for Satoshi Vision (SV). It began at around $ 100 more than two years ago, with the aim of adjusting the protocol with larger block sizes to reduce the transaction fees. The cheaper fees align with Satoshi Nakamoto’s original Bitcoin vision, hence the name.

It has made some good progress in that regard, as transactions keep increasing to record highs and continue to advance in that direction, but that hasn’t attracted buyers. BSV started life after the first gold rush in the cryptocurrency market at the end of 2018, so we don’t know how it would have reacted back then, but judging by the price action so far, we can say that Bitcoin SV has completely missed out on the crypto craze of late 2020 and early 2021.

Bitcoin SV is quoted as BSV or BCHSV in different cryptocurrency exchanges, since it is a hard form of Bitcoin Cash. The main goal when it was forked off Bitcoin Cash was low fees, which means that scalability remains the main focus for BSV developers. Recent data shows that transactions have increased and plans are for BSV to increase scalability further. This is a positive factor for Bitcoin SV, in comparison to Bitcoin. Bitcoin SV development is led by nChain, and when it started out, this cryptocurrency was supported by early Bitcoin Cash supporters like Calvin Ayre and Craig Wright.

Bitcoin SV Price Prediction for the Next 5 Years

With the public interest regarding Bitcoin turning from a means of payment to an investing instrument for added value, the need arose for another Bitcoin fork to take a life of its own as a payment method, which is how Bitcoin SV started. The Bitcoin Cash (BCH) network hard forks twice a year, as part of scheduled protocol upgrades. In November 2018, unlike previous BCH hard forks, there was a competing proposal which was not compatible with the published roadmap. That month, both groups started creating blocks in their respective, separate blockchains, which created Bitcoin SV (BSV) as a result of that split.

The main vision of Satoshi Nakamoto for Bitcoin was to be a payment instrument of broad and Bitcoin SV has been trying to live up to that vision since the split. According to the miners supporting BSV, one of the ways to do that is to increase the block size. Bitcoin SV proponents and the Bitcoin Cash community differed over the block size, hence the split. The BCH supporters wanted the block size to remain at 32 MB while Bitcoin SV supporters wanted the block to increase to 132 MB. The higher block size has supported the increasing number of transactions, which has soared in recent months, as the demand has surged during this time. The Bitcoin SV’s (BSV) Scaling Test Network (STN) reached a new record last month, processing more than 9,000 transactions per second (tps) at the end of January.

Just like the relation between Bitcoin and Bitcoin Cash, which is characterized by a lot of competition, the situation is similar with Bitcoin SV. There are attacks by the Bitcoin community, which have been weighing on the BSV. In spring 2019, a Twitter and Bitcoin user called “Hodlnaut, who also earned reputation for the “Lightning Torch” experiment criticized Wright publicly, with a large Twitter crowd, while Wright responded with threats to take legal action and his comments as fraud. Later, the Twitter crowd turned on Wright, hurting the sentiment for Bitcoin SV.

Although, that was just the beginning, as a number of crypto brokers delisted BSV. Binance was the first to remove Bitcoin SV from the exchange.  Kraken and Shapeshift followed soon after, delisting Bitcoin SV, while Binance’s CEO Changpeng Zhao went even further, commenting on Twitter that Wright is a “fraud,” and that “anyone who supports BSV from a tech perspective should be attacking the fraudulent Craig Wright, who is poisoning YOUR community, and not attack the rest of the world.” They blamed it on the “community sentiment”. On the other hand, the BSV community responded with Ed Pownall, a PR representative of Calvin Ayre and one of SV’s biggest supporters replying that delisting BSV sets “a dangerous precedent, while accusing these exchanges of “market manipulation” and “playing God”.

While it had a difficult time at the start, due to competition with Bitcoin which has a big share of the market and can turn the public against you, the present situation seems better and the future brighter. Several other exchanges have adopted BSV, with one of the latest ones being BuyUCoin. This is a digital commodities exchange popular in India. The firm announced that it has officially introduced support for Bitcoin SV [BSV] on its platform. BSV/INR and BSV/USDT trading pairs were listed in the platform and were available for trade.

Bitcoin SV uses the Scaling Test Network (STN) which is a project by the Bitcoin Association and operated by nChain. The purpose of it is to continuously increase the enterprise scalability. There are two ways STN uses the nodes, for mining, and for listening around the globe to make sure that transaction numbers seen are from a globally distributed network, in order to match real-life operations as closely as possible all over the world, similar to the Internet of Things (IoT).

It’s still early testing for the STN version 1.0.7 regarding the chain lengths, but so far users notice raw performance improvements. Kristensen commented on improvements made to the STN to increase the capacity:

​”The performance improvements in 1.0.7 played a big role here. The care and dedication from the SV node team is second to none. The improved handling of chained transactions appears to be paying dividends. We still want to play around here a bit more, with the recent increase to support chains of 1,000 by default.”

We have seen some record transactions-per-second (TPS) in 2021 so far. The record tps breaks were achieved with chain lengths which varied between 2 and 12. This confirms the long-term endurance of the network under load. BSV likes big blocks. BSV’s transaction capacity keeps increasing, with early February’s record 16,415,525 transactions in a single block, which is the largest on any blockchain, ever. It will only increase, as the next round of tests starts with chains of 25 increasing as the days roll on.

All this shows that the BSV blockchain is getting ready to receive and process big data and enterprise-tier applications. These could be all sorts of contracts such as financial or legal ones, IoT data, financial applications, exchanges, health data, government and property records, as well as a wide range of tokenized “assets” which could be anything really. These applications would also operate on a global scale. So, it seems like BSV’s high processing capacity and the growing potential for transaction scalability will become very attractive for companies which like to process large data throughput, without delays and transaction bottlenecks. In continuation of this, DotWallet announced only a few days ago that it is releasing a new service, which is called “Badges”, which is another advancement for Bitcoin SV, since now developers can create any kind of token on the blockchain. This gives BSV the capability for asset tokenization in line with BSV’s development vision.

On the weekly Bitcoin SV chart analysis, we can see that there is a clear trend, and that trend is bullish, as the lows keep getting higher. After every jump, there has been a retrace, which shows that buyers are not that confident, and that’s not a surprise, considering all the attacks. But at the same time, every single retreat has ended up a bit higher than the previous one, which also confirms that the trend is bullish. Moving averages look a bit confused, since they only appeared a while ago, given the short lifespan of BSV, but the 100 SMA has appeared now, and it has taken form. This moving average has been acting as support since October, and after the hammer candlestick in the last week of January, which was a bullish reversing signal after the pullback in the previous two weeks, the price bounced higher and it is heading up now. The current weekly candlestick looks quite bullish and buyers have pushed above the previous resistance, but we will see whether this jump ends like all the previous ones, followed by a bearish reversal. 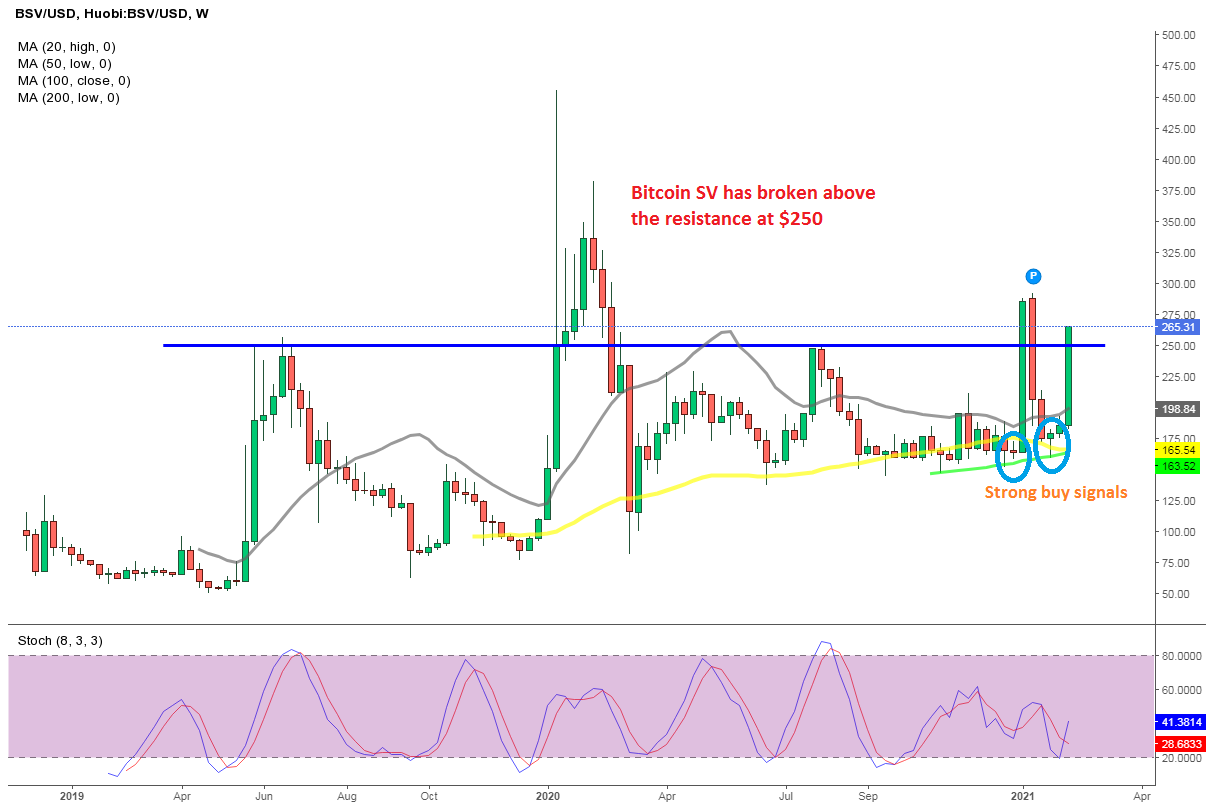